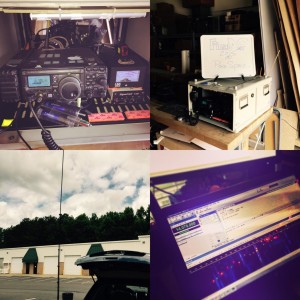 Every year the fourth weekend of June beckons ham radio operators from across North America to leave safety of their ham shack cocoon and head out to FIeld Day. It is a time for hams to practice their mastery over electromagnetic waves in more austere conditions so that they may be better prepared to serve their community in the event a natural disaster knocks out more modern, though less resilient, communications infrastructure.

It is also a time for camaraderie amongst fellow hams to show off their newest gear and for elmers (the term for seasoned hams) to share their knowledge with newer hams. As of late, it has also become an event to showcase what’s possible with amateur radio to a general public that has once again become interested in the DIY spirit that has been fostered by the Maker and STEAM Movements. In fact, April 2015 ended with highest number of active, licensed amateur radio operators ever in the United States with 730,283 hams.

This is the second year that PaxSpace has hosted a small “Get-On-The-Air” (GOTA) station for Field Day. A GOTA station let’s anyone, ham licensed or not, to experience the thrill of getting on the airwaves and talking with people all around the world. From our humble station at PaxSpace and operating under the callsign N1HNP, we were able to make QSOs (a term for radio contact) to hams in places such as Texas, California, Wisconsin, Vermont, Georgia, and even as far north as Ontario, Canada. The dozens of contacts made throughout the weekend were done using just enough power to light up an old 60-watt incandescent light bulb. We also had a chance to demonstrate a digital mode of communications known as PSK31 which allows you to essentially send text messages across the globe without the need for any intermediary equipment that modern computers and smartphones require.

Though you may have missed us this year, the good new is Field Day 2016 is only a year away! If you are interested in learning more about ham radio, we encourage you to check out American Radio Relay League (ARRL.org) and our local amateur radio club — St. Mary’s Amateur Radio Association (k3hki.org). Our local club offers many great courses to help you prepare to earn your Technician license which is the first of three grades of license in the United States, the subsequent classes being General and Extra. Hopefully by next year if we have a few additional PaxSpace hams we could set up a couple different radios to operate on a variety of frequencies and modes.