Who remembers having a View-Master as a kid? You know…that plastic binoculars-looking toy that used thin cardboard disks containing seven stereoscopic 3D images. Well, somebody gave my kids an electric Star Wars version this year for the holidays. Instead of holding it up to your eyes this new toy projects images onto a wall and comes with 3D glasses for super special viewing. 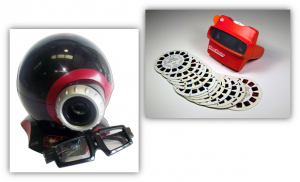 Needless to say they were excited to have their very own “holoprojector”. We quickly opened the box, put in the batteries (not included), turned off the lights, and hit the power button. Immediately we saw an amazingly clear image showing several Star Wars characters!! But before we could even get our 3D glasses on the image disappeared. I toggled the power switch a couple times and the image came back. Then gone. Then back. This continued for awhile with three very sad little kids. At this point I switched into geek mode and started to troubleshoot the problem. I quickly realized that if I left the projector on the image would come and go at random intervals. It was clear that we had a defective device and unfortunately did not have any receipt. If this would have happened to me 2 years ago I probably would have thrown the toy away and moved on. But since starting PaxSpace my childhood love of tinkering has returned and I was determined to figure out what was wrong.

When we returned home after the holidays I took the toy over to PaxSpace and immediately started to take things apart. If you don’t already know I am a Computer Scientist so my knowledge of electronics is just enough to be dangerous. But I did know that its always smart to start by checking each of the electrical connections. The projector light was obviously getting power but something was causing it to cycle at random. As I worked through the connections I noticed that there was a resistor which appeared to have a very poorly soldered connection. 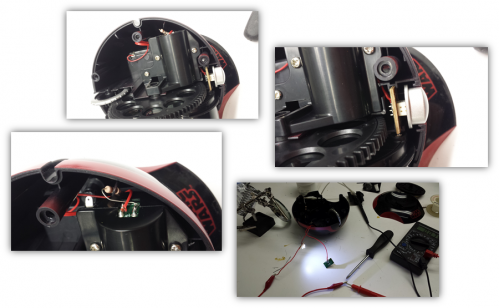 Firing up one of our irons I quickly re-soldered this connection as well as all of the others for good measure. Then I put the batteries back in and hit the power button half expecting nothing to work. I was wrong! The projector came right on and more importantly stayed on! I had done it and knew I would be a hero to my three children!

It was also a small victory for me too. I did not let this cheap little toy beat me and just end up as trash in some landfill. I took the time to find out what was wrong and was able to fix it in less time than it would have taken for me to buy a new one. That, my friends, is why PaxSpace exists. Tinker on!